Welcome!
Close
Would you like to make this site your homepage? It's fast and easy...
Yes, Please make this my home page!
No Thanks
Don't show this to me again.
Close
XTC
Virgin Megastore; Los Angeles
March 4th, 1999

The Virgin in L.A. is in this plaza type thing, which is multi-floored, and when I drove up I could see the line on the second floor.  It was pretty sizeable.  My girlfriend and I got there at 6:30PM, but I guess they'd been lining up since 5.  I swear, I was in line for an hour and it seemed like we didn't move an inch.  FINALLY it started moving...ever so slowly.  They were letting like ten people in at a time every five or ten minutes (there was a line *inside the store* too).  I had brought my copy of "Chalkhills and Children" (the definitive biography) and my vinyl copy of "English Settlement" to be signed.  I was also hoping to score some promo item for the new album.

Some guy came out and said that they were really taking their time with people, signing gobs of stuff, and that's why it was taking so long.  The guy showed his friend in line his newly autographed cover of "Apple Venus," which now had arms and legs and looked like a guy running...some Andy Partridge artwork.

There was this weird guy behind us in line who was rabitting on the ENTIRE TIME about all the celebrities he's met over the years and all the autographed stuff he has.  It totally seemed like he was just a collector, and I think he finally admitted that at one point.  (See he was talking the people behind us' ears off all night).  I have to admit, I occasionally wanted to jump into the conversation when he mentioned people like Gary Numan or David Byrne.  This guy seemed to know everybody!

About TWO HOURS LATER we finally made it in.  I had noticed when I was standing just outside the door that Andy looked like he was carrying on and having fun with everyone.  They were playing the new album inside and I got to hear it at least two and a half times through.  I liked it!  What sticks out in my mind is "River of Orchids", the two Colin songs and one about "F-U-C-K / is that how you spell friend in your dictionary?" (Editor's note: the song is called "Your Dictionary").  I saw some women taking promo posters off of the doors (which I had been hoping to find a stack of inside, but I didn't).  I asked how they got permission to do that and they said they had asked the security guard.  I did the same and he said "of course, everyone else is doing it", so I nicked the LAST one from the door.  The talkative guy behind me asked how I got it and I told him.  He looked envious.

There was a cool older guy in front of me who had a bunch of stuff to get signed.  We ended up talking about alot of XTC related stuff.  He had import CDs of several of their records, including a great import of The Dukes of Stratosphear which had a FULL COLOR BOOKLET as opposed to the crappy black and white US issue.  He also had the BBC "Transistor Blast" box set.  There was also a guy who was behind me for a while but left the line...evidently he had no idea who XTC were.  He was like "I was walking around downstairs and I heard the album.  It's pretty good!"  I started carrying on about how I was at their web site and knew I had to come out when I found out about it.  He just kind of went "like I said, I just heard them downstairs".  Weird!

Anyway, I got more and more nervous as we got closer.  I could see Andy right there!  He was wearing all brown...brown cap, brown jacket, brown pants and his tinted glasses.  Colin (who is pretty tall) was wearing a purple shirt and a vest. 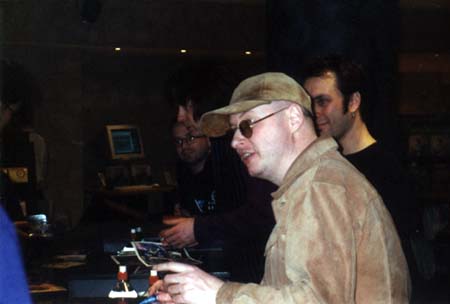 Some wiseacre brought a laserdisc of the Greg Kinnear film "Dear God" up to the counter and said "I didn't know you guys put out a 12 inch of this!".  Andy just sort of looked at it and smiled and said "yeah, larf larf larf."  I thought it was funny.  Then I heard Andy discussing some hidden sound on "Apple Venus" with him.  Evidently there's something in the background of the acoustic song on the album (Editor's note: our guess is they were discussing "Knights In Shining Karma").  He said if you crank it and play with the balance you can hear something.  I wish I would have paid more attention because I'm not sure what it is.

I was two people away from him and I watched Andy joke around with the guy in front of me.  He signed his "Nonsuch" cover and drew little wheels beneath the castle, saying "just in case you want to trans-PORT it somewhere" (extra emphasis on "port"...very British...I found it amusing). Then finally it was my turn. 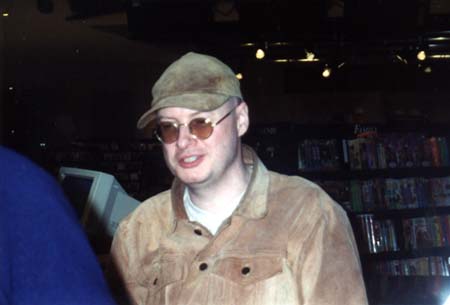 I just said "HI!" really excitedly and I felt like a real dork.  He proceeded to be very nice, jovial and sincere.  I shook his hand and he asked "are you wilting?"  I told him yeah and that Jenn and I had been in line since about 6.  He just shook his head.  First he signed the promo poster that I aced, adding wings to his shoulders and signing in the middle.  I told him I had been listening to them since 1989 when "Oranges And Lemons" came out, and he jokingly said "sounds like a long and warped upbringing!"  Then he signed my "English Settlement" LP and I told him "feel free to add any artwork you want."  He said "hmmm...how about a stegosaur?".  And he drew little scales on the tiger's back...very cool!  Then he signed my "Chalkhills" on the first page. He wrote "SHAKESPEARE...NOT!".  I told him thanks and it had been nice to meet him, shaking his hand once again.

Colin, however, was somewhat of a different story.  He was tremendously quiet and his facial expression never seemed to change.  I shook his hand but he didn't say much.  He started signing all my stuff, and I also told him how I'd been into them since '89 and he looked up and just said "oh?"  Then I asked if I could get a picture with him and Andy (as many people throughout the night had been doing) and he said "sure, come on around back".  I posed with Andy and Colin and Jenn took a shot of us.  I told Colin it was a pleasure to meet him, and quite surprisingly he said "it was a pleasure meeting you too".   I thought that was cool of him. 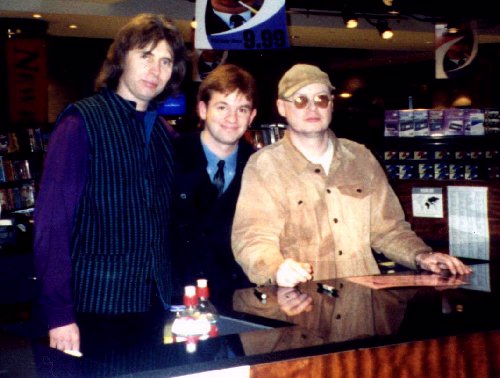 All in all, it was a cool night.  I kind of wish I had said more to Andy and Colin, but oh well.  I got a picture and got stuff signed, and that's good enough.  I was really impressed with Andy, but not too impressed with Colin.  It's funny because I always imagined Andy would be the less social one, but it's totally the other way around.  Andy is just brimming with life and very personable...Colin's kind of stoic.  But now that I look at promo shots of the band from the past, I can totally see the two opposing personalities.