Welcome!
Close
Would you like to make this site your homepage? It's fast and easy...
Yes, Please make this my home page!
No Thanks
Don't show this to me again.
Close
Meeting Steven Banks
Disneyland; July 6th, 2001

Most folks right now are probably saying "who in the heck is this Steven Banks guy?"  And so I implore you, dear reader, to indulge me as I relate a little backstory.

I first came upon the comedian/musician/actor/performance artist Steven Banks around 1989 or so.  I was up late one night and saw a special entitled "Steven Banks' Home Entertainment Center," which was one of the most creative and funny things I had seen in a long time (not to mention the fact that it hit a little close to home).  "Home Entertainment Center" is basically a one man show set in Steven's apartment.  Steven walks in from a day at the office and discovers a message on his machine from his boss, saying that he needs Steven's speech to the board of directors.  With that in place, the special is about everything *but* the speech.  Steven is the maven of procrastination: he tries and tries to sit down and finish the speech but is constantly distracted, picking up various instruments to play songs, imitating his favorite rock stars, playing with action figures, and baking cookies, to name a few things.  One tiny thing Steven sees in his apartment might inspire an entire song.  All the while he tries to deal with his grouchy landlord, demanding boss and annoyingly possessive girlfriend (none of whom we even get to see!).  The payoff of the special happens when Steven finally gets to achieve one of his dreams: he is asked to become a journeyman musician with the band of an old friend.

Sound boring?  Well, it isn't.  "Home Entertainment Center" is actually a hilariously compelling little show, and a subtly brilliant piece of theater.  "Home Entertainment Center"s brilliance lies in the fact that it raises the banal to the sublime...how can one guy procrastinating in his apartment prove to be so entertaining?  Its brilliance is similar to that of "Mystery Science Theater"...it takes something that a good number of "normal" people do and expounds on it.  Who hasn't wandered around their abode pretending they're in their own show?  It also approaches "Seinfeld"-dom with its revelling in "nothing."   "Home Entertainment Center" was indeed funny, but it also resonated with me deeply on a personal level.  This guy was just like me...he had a curious brand of ADD which made even the simplest tasks agonizing...he spontaneously broke into song...he messed about with his many instruments...he created entire scenes with action figures.   I saw myself in Steven and therefore didn't feel so alone anymore.  Steven became one of my heroes.

Well, following "Home Entertainment Center," Steven got a contract with Showtime to do a pilot for a TV show, which never went beyond the pilot.  PBS then picked him up for a short lived series called, aptly enough, "The Steven Banks Show."  It was funny, but it didn't quite capture the magic, spontaneity and subtle brilliance of "Home Entertainment Center."  Steven was still great but, as my dad once put it, he never really found the right audience.

Steven had kind of been in the back of my mind recently, as I had just shown "Home Entertainment Center" to someone and was copying his CD for another.  I had kind of been wondering what had happened to him for quite some time.  The little exposure he had came when his songs recieved occasional airplay on the Dr. Demento radio show.  But would we ever see the man's work again?

As you all may know, I see a Beatles tribute band called The Fab Four quite a lot.  They play at Disneyland all the time and I have a season pass, which means free admission (and parking).  So I go there on Friday and I'm talking to my friend and her mom when I look out into the assembling crowd at the Tomorrowland Terrace...hmmm, the back of that guy's head looks familiar (yeah, I don't know how I recognized him this way, but I just did).  Then he turns his head a bit to talk to the person next to him.  "Wow," I say, "that sure looks like this comedian I used to like named Steven Banks."  He turns again and I get another good look at him.  He's got liitle glasses and facial hair...hmmmm...but that face looks so familiar.  And he appears to be the same build.  "Wouldn't it be funny," I say to my friend "since I just watched the special the other day, and I'm lending his CD to someone."  Since my interest is piqued, I ask my friend to go with me out into the crowd and stand around him, so I might be able to hear his voice.

Well, I heard him utter one thing and I knew for sure...it was him!  I was too shy to ask him himself, so I talked to the guy next to him...a tall kid looking a little younger than myself.  "Um, excuse me, what's that guy's name?"  "Steven.  Steven Banks," he says.  "Wow, I thought so!" I reply.  No sooner have I done that then I notice he's talking to Steven and pointing me out.  I hear Steven ask the kid "what's up?"  At first Steven looks distressed, but once he figures out I'm a fan he goes "oh, alright!" and comes over to talk to me!

The first thing out of my mouth is "Home Entertainment Center!" and he says "yeah, that's me."  I tell him I'm a huge fan and he asks my name.  I tell him it's really weird to be seeing him, since I was just watching the special the other day, and I'm copying the CD for someone (maybe I shouldn't have mentioned the CD copying part...though it is out of print).  Then I ask him what he's up to and if he's got any other projects coming up.  He tells me that he's trying to take the HEC special to New York, since he never did it there, and that he's trying to work on another series for PBS.  I then ask if it was indeed him at the end of the Paul Reubens "True Hollywood Story" on E! and he laughs and says "yeah, that was me, getting my little protest in there" (he was seen in a crowd of people on an L.A. street corner who were protesting Reubens' arrest and the subsequent loss of his TV show).  He adds "I've never actually seen it myself."  He says that, apparently, he was trying to get Paul Reubens to appear in an episode of his TV show back in the day, playing the role of a doctor, but he wouldn't do it.  He says he'd been pleading with him to do it, and was really bummed when he declined.  I add that I am a really big Paul Reubens fan too.  I tell him it's a shame his show got cancelled after so little time on the air, and he says that that whole process was a whirlwind, and that they used to tape like two episodes a week, and he wonders how they even got through it back then (I *think* he was talking about his own show...though in retrospect, he may have thought I was talking about "Pee-wee's Playhouse," since the cast and crew went through a similar whrilwind process on that show).

Then we chat a little bit about The Fab Four.  He says he saw them a year ago and they're phenomenal, and I tell him how my friend and I have passes, so we've seen them like 40 times.  I ask if he'll be around for the other sets and he says he doesn't know, since he's there with his family (there were about five people with him).  I ask him if he'd mind getting a picture with me and he said "oh, no, not at all," and then I mention that I don't actually have a camera and that we'd have to find one of our friends to borrow one.  I also decide to hand him one of my business cards (good thing I had restocked my supply in my wallet before I left home that day).  I tell him that it would be an honor if he'd drop me a line or sign my guestbook (hey, wishful thinking).  Once the show starts I make my way into the crowd with my other friends, but it's hard for me to concentrate...I just met one of my contemporary heroes!  It was kind of cool to look back in the crowd occasionally and see him singing or dancing along to the show with his family.  Very surreal!

So after borrowing my friend Sarah's camera, at the end of the first set I look back through the crowd at Steven and gesture to him with my camera and he nods and mouths "sure."  We find a good spot to take the picture and I say "well, only if you're okay with this.  I don't want it to be too conspicuous, so you get spotted and swarmed on," and he says "no, it's alright, I'm sort of sub-famous anyway."  As we're getting ready to take the picture I notice he puts his arm around me, which was very cool of him, so I do the same.  There are a few people looking at us, but look rather perplexed as to who I'm taking the picture with (their loss). 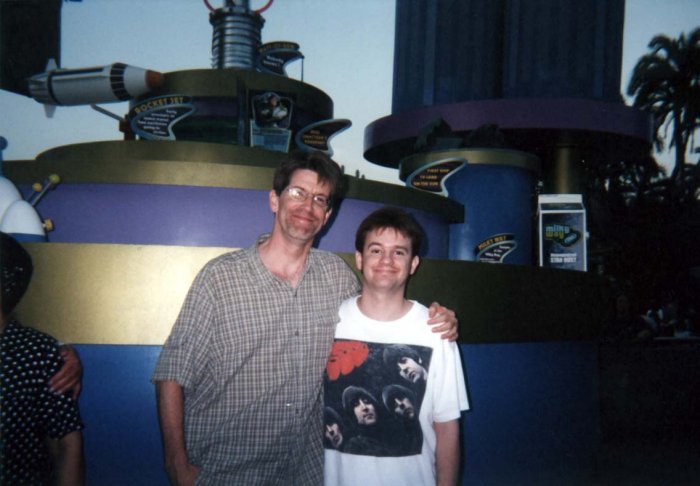 We take two shots - one of me just smiling, and the other of me pointing up at him and grinning - and then I shake his hand again and thank him, adding that he's one of my heroes.  He says he might see us later on for some of the other sets and then bids us adieu.

Then later I remembered that that morning I had just had a very very random thought about what I would do if I someday met Steven Banks, which really creeped me out.  I mean, first I get emailed out of the blue inquiring about Steven's CD, then I watch his special, then I thought about him that morning...then I met him!  I truly felt like I was in an episode of the "Twilight Zone"!

There is so much more I would like to have chatted with him about - for instance, I was on the verge of mentioning my friend Dick Rockwell and how he had used HEC in a film class, dubbing it a "brilliant piece of theater" - but what I am hoping he'll do is check out this website and drop me an email.  I'd love to correspond with him, even for a bit.  I think he was shocked that anyone even recognized him.